In this post we’re going to explore Greece’s very first theatre; one that housed the very first dramas. In keeping with the spirit of the theatre I’m going to have a little fun with how I share. I hope you like it!

Set tucked into the bottom of the south slope of the great Acropolis in Athens near the current day Plaka District lies the once-great Theatre of Dionysus. She was a grand theatre where the art of theatre and drama grew from a parade of people singing simple dithyrambs to Dionysus to great productions exploring what it is to be human. We owe much to this majestic and sacred theatre and we also owe much to the man Thespos. For in the 6th century, when he started acting out the dithyrambs that were usually sung during the first festivals, drama was born.

The tyrannical but wise Peisistratus decided the people needed something that would bring them together and help make Athens the great power he knew it could be. And so the Theatre of Dionysus built. People of all classes would travel for days to gather together for annual celebrations in honour of the God Dionysus.

For nearly a week under the hot summer sun slaves enjoyed a little bit of freedom from their duties, the men could connect with each other and honour their accomplishments and the chiton-wearing ladies in the latest fashions could gossip about whatever and whoever. …”who is that toga-clad Roman behind the Priest of Dionysus’ throne?”…. People would boo and hiss their displeasure or weep and laugh with abandon and contemplate life, libations were poured, the children of fallen soldiers were presented on stage when they became of age, the names of the best Athenians were read for all to hear, competitions were held over dithyrambs ….and then there were the plays.

After many long and stressful hours playwrights would submit their finest works for consideration in the greatest of festivals. Three of the best playwrights were chosen each year, and each wrote a tetrology consisting of a series of three linked tragedies and a satyr play until 486 BC when comedy was added as an option to the satyr. The playwrights, once chosen, were matched with a prominent Athenian citizen that was given a great honour and responsibility to his playwright. He was to provide the chorus, musicians, sets, costumes and funds for whatever else the playwright might need. The playwright had only to worry about writing the play, the actors (which sometimes included himself) and anything else that was involved with getting a winning production on stage.

The playwright, given the great opportunity of presenting his work at the Theatre of Dionysus, wrote his plays in poetry with the intent to deeply stir the emotions of his audience. His desire and best chance at winning the great honour of best play was to make the Athenians feel and think deeply without getting himself booed off the stage. He wrote of humanity, how to conduct oneself, the state and the relationships between humans and gods. However, it was not enough to move and teach the Athenians, the playwright truly wanted that prize. If the ten chosen citizens agreed his was the best play, he would win. The wreath, sacrificial animals and a banquet in his honour would be his; a grand prize it was, indeed. 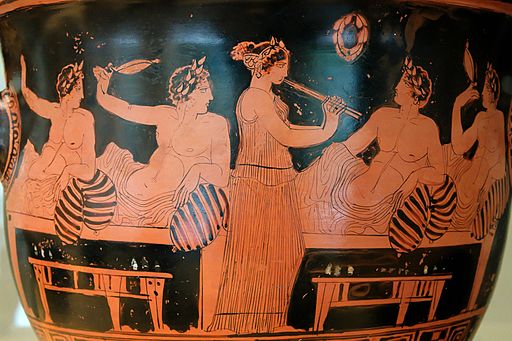 The evolution of the Theatre of Dionysus…

It is believed that the great and glorious Theatre of Dionysus was the very first theatre and she went through much growth throughout her life. She started life in the late 5th century B.C. Under the tyrant Peisistratus as a simple outdoor auditorium in the shape of a semicircle. The first rows of her theatron faced the orchestra that held the thymele, or altar of Dionysus, in its center.

In time, the growing Theatre of Dionysus gained a proper stage for her actors that was placed behind the orchestra. An early skene that was painted to look like a temple or palace was placed at the back of her stage so the actors wouldn’t be seen when changing costumes or when they weren’t needed.

Roughly 150 years after her creation the Theatre of Dionysus went through a great deal of growth. Her seating was expanded to include extra rows around the performance area and the larger frail wooden structures were replaced with a more sturdy stone. Her first rows of seats were re-made with limestone and the seats in the back for the ordinary citizens, women and slaves were made of wood. Paradoi were also added to the sides of her stage so actors could access the sides of the stage and the upgraded skene giving her playwrights more options when writing their plays. The grand theatre also gained an exciting new invention that allowed her playwrights to include even more thrilling elements to their plays…flying Gods! The revolutionary Deus ex Machina was added above the skene and allowed Gods to be lowered in and lifted out of a dynamic scene.

A great Athenian statesman named Lycurgus gifted the majestic theatre her next epic remodelling project in the 4th century BC. He added even more rows of stone seats, horizontal walkways and vertical stairs to reach her seats. The Theatre of Dionysus now was able to seat between 15000 and 17000 spectators in her 68 rows. Gone were the limestone seats and in their place were carved marble seats with back supports for officials such as the chief magistrates of Athens. The Priests of Dionysus claimed 50 of the now 67 front row seats, the officials were the next to be seated and then the guests of honour. The ordinary citizens, women and slaves took the rest of the seats in her theatron.

During the time she was occupied by the Romans, the magnificent and enduring theatre went through more changes under emperor Nero. She received a new stage with a gleaming floor of marble dedicated to Dionysus and Nero, an even more grand skene and many new Roman architectural details. The beloved Theatre of Dionysus also received even more new seats to accommodate all of her new spectators.

In the 5th century the ancient Theatre of Dionysus was abandoned.

Her once beautiful and alive orchestra filled with choruses, actors, officials and priests making their presentations became a courtyard for a basilica. Her rows upon rows of stone seats that held countless spectators as they were awed and entertained through innumerable plays as far back as the very birth of drama were ripped apart and quarried for other largely forgotten and common projects.

The Theatre of Dionysus today….

Today the great theatre that was once the birthplace of Greek drama and the place we owe our gratitude to every time we watch a show whether live or on screen, is just a shadow of her former self. The bright, lively place where people worshiped Dionysus and contemplated life as a human sits in ruins. Only small sections of her rows and rows of stone seats still exist. Gone is the altar and the stage. Only a worn orchestra and bits of her skene remains. In her day she hosted great festivals that brought people together to celebrate, now she hosts tourists climbing all over her like she’s a dead oddity for the price of a museum ticket.

In the next post we’re going to explore what a Greek drama was like and see a couple of examples.

What are your thoughts on the Theatre of Dionysus? Please share in the comments section, I’d love to read them because classical history rocks.

If you enjoyed this look at the Theatre of Dionysus, please take a moment to look around the gift shop and support the work that goes into this blog. You’ll find the entrances to the right and bottom of this post.

4 comments on “The Tragic Life of The Theatre of Dionysus”