A Little History of Pompeii….

Pompeii started out as a collection of Oscan settlements that used the river Sarno for trading. They were happily doing their thing and trading with the Samnites, Italians, Etruscans and Greeks. Being built on old lava flows that created fertile farming land and close to hot water pools and the sea made Pompeii a pretty attractive place. In 600 BC the Greeks took it over then in the 5th century, BC it changed hands with an assortment of colonizers including the Phoenecians, Etruscans and the Greeks again in 474 BC.

When Rome decided to take on Carthage, Pompeii joined the battle on the Roman side. It turned out pretty good for them at the time. When Rome won, Pompeii got the added benefit of all that trade with the rest of the empire BUT they didn’t get Roman citizenship. They weren’t too happy about that and they fought a bit with the Romans in what became known as the Social War in 91 BC.

This time it didn’t turn out so well for them and in 89 BC the Romans surrounded the town and cut them off from the outside world. Eventually the Pompeiians decided that eating was more important than winning so they gave up and became a Roman colony. The upside was that now they could take part in Roman government. The downside: the old Pompeii ceased to exist as they became Romanized.

Traders and merchants arrived seeking their fortune, farms and wineries grew, the dye industry became quite big and trades of all sorts flourished. The entertainment and service industries exploded; an amphitheatre was built for gladiator games, theatres presented plays and musicals, bars and taverns sprang up everywhere (estimates suggest around 150!) and bath houses were built. An upside was that in order to take care of all of those people, sewage gutters were built into the streets and underground pipes were placed to pump water around the city.

In 62 AD Pompeii was nearly destroyed during an earthquake caused by trapped gasses in Mount Vesuvius. Water pipes were broken, streets cracked, people were killed when walls and buildings toppled and the buildings that still stood were badly shaken. They started to rebuild and carried on with their lives unaware that as horrible as it was, the earthquake was nothing compared to what was coming.

In August of 79 AD earthquakes were felt again. Water sources dried and those who remembered the earthquake of 62 left town afraid of what could happen. Unfortunately, not everyone did.

The official date is August 24, 79 AD but the fact that fresh olives were found in some houses has brought up discussions that the date of the eruption may really have been in October to coincide with the olive harvest.

In any case, around 1 pm Mount Vesuvius began to erupt. Pliny the Younger recorded in letters to the Roman historian Tacitus (where we get much of our knowledge of the eruption) that the first thing he recalled was a column “more like an umbrella pine“. We now call this a Plinian eruption. The shape of the eruption looked much like a pine tree with debris falling away from the “trunk” in the shape of branches. It erupted with such force that it shot rocks, super heated gas and a cloud of ash at least 20 kilometres into the air…that’s about twice the cruising altitude of airliners.

The sea shallowed from the debris shot into it and the pumice created banks in the water that prevented boats from rescuing people. The winds changed direction from it’s usual northeast in from the bay to southwest towards Stabiae making escape for the Stabian people difficult by water.

Then there were horrible earth quakes and people had to decide whether to run or stay inside and hope that the swaying walls of their houses would stay up. That night as people tried to escape into the country they saw the sky lit up with blazes from several places on Vesuvius.

Those who tried to escape by water the next day found that the rolling earth and the ocean seemingly being sucked back sent the shoreline further out and many sea creatures were stranded on the sand. A big black cloud formed over the mountain and fire shot out and lightning flashed.

The ash cloud rained down and turned day into “a darkness that was blacker and denser than any night, and they were forced to light their torches and lamps”. Rocks and pumice continued to fall and destroyed much of Pompeii. Then another ash cloud fell and “We had scarcely sat down when night came on, not such as it is when there is no moon, or when there are clouds, but the night of a closed place with the lights put out. Once could hear the shrieks of the women, the cries for help of the children, the shouts of the men: some were calling for their parents, others for their young ones, others for their partners and recognising them by their voices. Some were lamenting their own case, others that of those dear to them. There were those who, through fear of death, invoked death. Many raised their hands to the gods, but the greater number concluded that there were no longer gods anywhere and that the last eternal night of story had settled on the world.” (The Letters of the Younger Pliny, Literally Translated by John Delaware Lewis, MA)

After the dark waves of ash and pumice, broken up with the glow of the fires, stopped and gave way to smoke and cloud, daylight returned. The area now looked like it was buried deep in a snow of ash. Nothing was recognizable, the city was gone and life would never be the same for the survivors. 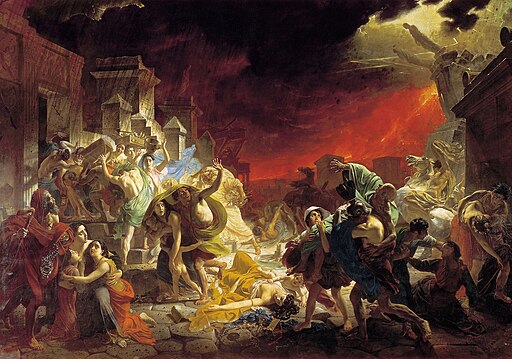 Aside from small finds and lots of looting of those finds, the city pretty much remained buried until excavations began in 1748 under King Charles of Bourbon.

Pompeii was not the only city buried by Vesuvius. Herculaneum, Oplontis and Stabiae were also destroyed during the eruption of 79 AD.

The ash and pumice of Vesuvius preserved Pompeii really well and there’s a lot we can learn about not just the city, but life in general around that time from the archaeological remains. Over the next couple of posts, we’ll have a closer look at life during that time.

What are some of the things you would like to know about Pompeii? Do you have any cool facts about it? Please share below and I hope you enjoyed this post…because Classical History Rocks.

2 comments on “The Loss of Pompeii”