Today we’re going to explore a Roman bath and take a walk through what a day at the bath might be like. Please gather your rubber duckies, boats and wind-up paddlers (I LOVED those!) and let’s go take a Roman bath! Not for real, though. I don’t think my laptop would like that.

A little note: if at any time you need to duck out for a toilet break, they’re around behind the frigidarium. Don’t worry about missing much, you can catch up on things from the person sitting next to you. Going to the toilet was not a private affair in Rome.

First, a little background about the Roman bath might be helpful. It’s usually a good idea to know what you’re going to tour before you actually tour it…unless you prefer surprises. You do you dude.

Here’s a map of a bath in Pompeii. You may find it useful while we take our tour…

What was a Roman bath?

Okay! For those who want to know about what we’re touring, what exactly was a Roman bath? Little hint: it did not involve your socially acceptable style of toga and bath bombs….though that could be fun.

The bath was THE thing in Rome. They were everywhere and some towns had several of various sizes from small buildings to compounds of many acres. Absolutely everyone would go to the bath if they had the money or it was a day the Emperor, or a politician hoping to make a few voters happy, or just someone who wanted to do something nice and was tired of being around stinky people, paid for them to go. Everyone from slaves to the Emperor would go to the baths. They were the community center of Rome and going was a big part of life as a Roman.

They weren’t just a place to get clean. While at the bath, you could catch up on the latest happenings, have something to eat from one of the food vendors, exercise, have a drink with friends, catch a show from a variety of entertainers or learn something new by catching a talk given by a philosopher.

Now that we got all that preamble out of the way, what was a day at the bath like?

Long before anyone got there, a near army of unfortunate slaves would be cleaning and maintaining the baths. Some would be cleaning and preparing the baths, and some would have the not-so-great job of servicing the ducts and heating the baths. The ones heating the baths would have to go through the dark tunnels underneath with wood to feed the fires of the hypocaust. The hypocaust was the furnace system made of small pillars that allowed heated air to flow under the floors and up a ducting system of pipes in the walls of the heated rooms. It also heated the water that would be sent through pipes to the various pools of the bath. Being stuck in a hot, dark, dirty space feeding a fire to heat a bath (for someone else!) that might have just been a few meters away must have been a pretty lousy job.

For those who were lucky enough to be in the bath instead of under it, their day started by handing their admission money over to the balneator.

Once inside, they would head into the apodyterium to get changed. Here, they would put their clothes and personal items on shelves and get a light oiling. Many of the wealthier users would leave a slave or pay an attendant to watch their things as it could be pretty embarrassing to have to leave the bath and walk down the streets without their toga thanks to an opportunistic thief.

Next they would head into the palaestra or atrium for a bit of light exercise. People of all ages would head into these courtyards that were meant only to work up a bit of a sweat, not do any serious workouts. You might see the men working with weights or doing some wrestling, running, or maybe a game involving some skill such as fencing. The women were expected to partake of more “ladylike” exercises such as ball or hoop games or swimming.

Next we look at the tepidarium. This was a slightly warm (or tepid) room and was the first of the bath rooms. Here they would use a hook-shaped scraping tool called a strigil to scrape all the dirt and oil and nastiness from their skin. This was also a great chance to show off their wealth by hiring someone or getting their slave to do it. This was also where they could hire a depilator to pluck the hairs from their body.

After getting scraped and plucked they would head into the heart of the bath. The caldarium was the hottest room where the serious bathing happened. It was hot and humid and it was not unheard of to have to pull people out of the bath after they pass out…especially if they’d been drinking. Depending on the size and facilities within the caldarium, they might just have a simple bath and go to the basin with cool water when they got too hot…if they didn’t have a slave to pour water over them with a patara. If the facilities existed, they would spend time in here swimming, talking, snacking and drinking and generally having a nice time chilling at the bath. 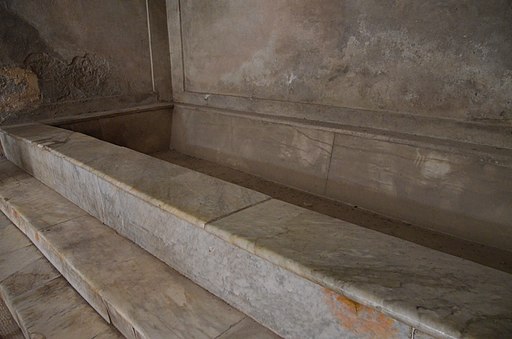 When the Romans were finished bathing, they headed off to the frigidarium. The frigidarium was the final stop and was a colder room where they would cool off with a dip in a cold bath. 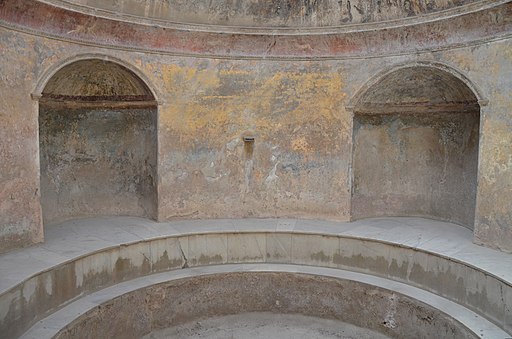 Once the Romans were all nice and squeaky clean, they might hang around a little longer and have something to eat from a food vendor or check out the day’s entertainment. Some baths had a type of theater where they could catch a short show. They might also stop and spend a moment on the grounds watching a performance put on by jesters, gymnasts, jugglers or musicians. There might have been poetry readings and talks given by philosophers that they could enjoy.

I hope you enjoyed your tour of the Roman bath. If you have any questions or comments, please feel free to leave them in the comment section below.